Incredibly it’s now over 20 years since the groundbreaking TRIGGER HAPPY TV hit our screens. It made and overnight success of its creator and writer DOM JOLY, and gave all of us a bank of new catchphrases to yell across the street.

Now, the multi-award winning comic and author of the incredibly popular travel books – The Dark Tourist, Scary Monsters And Super Creeps and The Hezbollah Hiking Club is taking to the road for the next leg of his first UK tour since 2011.

As with most shows recently, Dom Joly’s Holiday Snaps – Travel and Comedy In The Danger Zone, started and then came to an abrupt pandemic halt. The good news is it is back on the road and getting to Port Talbot next, tickets details at the bottom of the page.

Dom will be talking about his exploits as a serial globe-trotting and seeker of dangerous travel spots. From North Korea though the Congo and Syria to Chernobyl, he’s visited some of the most unusual places on the planet. Joly famously attended school with Osama Bin Laden and armed with a trusty Powerpoint, fans can expect his holiday snaps to provide comedy and a sense of danger.

Before he makes his journey into Wales we put a Zoom call in to Dom to talk about the show, Trigger Happy TV and some very nice memorabilia we spied on the walls of his office – including a plastic turd (he’ll explain all during the interview).

And it’s the room he was sat in where our chat began, we had to compliment him on a very cool office at his Cheltenham home.

As well as being yelled at when he goes out shopping, Dom has remained enormously popular since his hit Channel 4 show, Trigger Happy TV, which was sold to 70 countries. His three travel books and regular reality TV appearances have brought him to a wider audience.

Dom’s ’22 tour will also preview his forthcoming new book, Such Miserable Weather, which features stories about the towns and theatres he visited in 2020.

He will also meet fans after the show to sign copies of his latest book, The Hezbollah Hiking Club.

DOM JOLY HOLIDAY SNAPS gets to the venue below, just click on the link to get to the tickets, 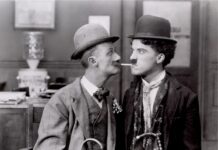 Cardiff Confirmed as Next BBC City of Comedy 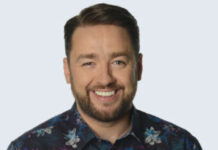 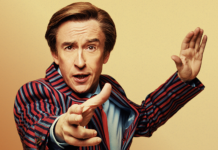 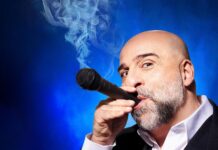 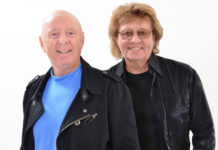