“You’re a special group of players and coaches with a passionate set of supporters right behind you. Good luck Wales, Pob lwc Cymru!”

That’s the message from Welsh Ministers today as Wales prepares to play in the first FIFA World Cup final in 64 years.

First Minister Mark Drakeford, Economy Minister Vaughan Gething and Deputy Minister for Arts and Sport, Dawn Bowden all sent good luck messages to the team ahead of their opening game against the United States of America tomorrow (Monday 21st November 2022).

“This is the first time Wales has reached the World Cup finals in more than 60 years. For many, this will be the first time they’ve seen the senior men’s football team play in a World Cup in their lifetimes.

We’re fortunate to be represented by a special group of players under Rob Page’s inspirational leadership.

I hope they realise how proud we are of the team.

The whole country is behind them and we all wish them well for the tournament. Pob lwc i chi.”

An audience of around five billion people will watch the FIFA World Cup. This provides Wales with a rare opportunity to introduce our progressive, dynamic nation to new audiences around the world.

Economy Minister Vaughan Gething, will promote Wales in the USA tomorrow with a full programme of engagements in the capital, Washington DC.

“As Wales takes its rightful place at the top table of the world’s biggest sport, this is a unique opportunity for Wales to shine on the international stage.

It is the most significant marketing and sports diplomacy opportunity and we are determined to grasp it to benefit people and businesses across Wales.

We will proudly promote an open, progressive Wales – a nation built on fair work, diversity, inclusion and respect.

The opening game against the USA will make Wales visible right across one of our most important trading and cultural partners and the game against England will vividly illustrate the fact the UK is made up of four very different and distinct nations.

The Welsh Government is determined to help create a legacy from Wales’ participation in the World Cup. It is investing £24m in sporting facilities over the next three years.

“We are determined to ensure Wales’ first World Cup campaign in more than six decades will leave a lasting legacy.

The sense of excitement around Wales’ participation in the World Cup is palpable. To capitalise on that huge sense of national pride and enthusiasm, we are bringing fans together through the £1.8m Partner Support Fund.

The significant investment we’re making in sporting facilities in Wales will help nurture the next generation of talent.

This Wales team should take enormous pride from the joy they have already given to so many. The relationship this team has built with Welsh fans is something truly special. Pob lwc Wales!” 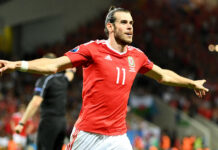 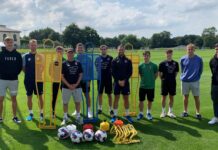 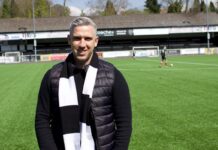