Okay, so the quote above is from Macbeth but as it’s spoken by the three witches it seemed appropriate to use it to celebrate the return of WICKED which is coming to Cardiff in 2024.

Wicked is one of those magical musicals that enthrals everyone who sees it. Everything about Wicked is wickedly magical, the story, the costumes and of course, some of the most incredible songs you’ll find on any stage.

I think most of us know that Wicked has its origins in the 1939 classic movie The Wizard of Oz – and with Christmas around the corner, no doubt we’ll all be watching that again. The musical however comes from a 1995 novel by Gregory Maguire called Wicked: The Life and Times of the Wicked Witch of the West, which in turn was a retelling of the origin L. Frank Baum book – The Wonderful Wizard of Oz.

So the plot is a beguiling backstory and future possibilities to the lives of some of our most characters from The Wonderful Wizard of Oz and reveals the decisions and events that shape the destinies of two unlikely university friends on their journey to becoming Glinda The Good and the Wicked Witch of the West.

But like most great stories, Wicked is all about relationships, particularly between two best friends, one of whom is beautiful and popular, and the other is misunderstood as a wicked witch.

Check out our Wicked Facts a little further down the page……

We say return because the production played to sold-out audiences during its two previous visits to Cardiff, selling nearly 150,000 tickets across its runs in 2014 and 2018.

The West End and Broadway musical phenomenon, is still running in London at the Apollo Victoria Theatre, where it has already been seen by more than 11 million people and is now in its 17th year.

With a touring cast, orchestra, company and crew of 82 people, and a further 20 people employed locally, “the blockbuster stage show” (Edinburgh Evening News) won the BroadwayWorld UK Award for ‘Best Touring Production’. We’re told that casting will be announced in due course.

“We are proud to be bringing Wicked back to the magnificent Wales Millennium Centre, where incredible audiences greeted us during two previous sold-out engagements. We’re excited to have this opportunity to share once again the spectacle, magic and emotion that has created unforgettable memories for audiences in Wales and all around the world.”

“We can’t wait to welcome the witches of Oz back to delight our audiences once again, nearly ten years after Wicked’s first visit to our Donald Gordon Theatre. It speaks volumes that this musical has continued to cast its magical spell across the world for 20 years, and I just know people will queue in their droves to watch it – whether for the first, second or third time – at our home for world-class musical theatre in Wales.”

As we said, the show has been to the Wales Millennium Centre twice, the review then we’re fantastic……

Wicked has already been seen by more than 60 million people worldwide and 2023 marks the 20thAnniversary Year of its Broadway premiere. Productions continue on Broadway, in the West End and on tour across North America. Wicked will also return to Sydney, Australia and Tokyo, Japan in 2023.

And one little extra fact that needs its own space. Our own SOPHIE EVANS spent a long time in the show in London from 2017 to 2019. She then returned to Wicked to reprise the role of Glinda in September last year.

Sophie said at the time……

“Playing Glinda in the West End for two years was a dream come true and I am overjoyed to be given the opportunity to play this iconic role again. To be able join all of the returning cast bringing this incredible show back to London is an absolute thrill for me.”

The show features songs by multi-Oscar and Grammy Award winner STEPHEN SCHWARTZ (Godspell, Pippin, The Prince of Egypt, Disney’s Pocahontas, The Hunchback of Notre Dame and Enchanted). Yes, that does mean Stephen is the guy who wrote ‘Defying Gravity’.

As we mentioned the show is based on the multi-million copy best-selling novel Wicked: The Life and Times of the Wicked Witch of the West by GREGORY MAGUIRE and written by Emmy and Tony Award nominee WINNIE HOLZMAN (creator of the landmark American television series My So-Called Life). Musical staging is by Tony Award-winner WAYNE CILENTO with direction by two-time Tony Award-winner JOE MANTELLO.

WICKED gets to the Wales Millennium Centre from 24th October to 23rd November 2024. When you get your Christmas diary make sure you circle the date Friday 3rd February 2023 at 10am as that is when tickets go on sale – HERE.

Jersey Boys at Swansea Arena – Oh What a Show!

Death Drop 2: Back in the Habit – ‘Drag’ Yourself Out for a Dead Funny Night 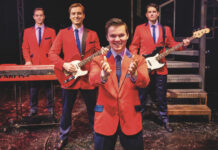