Before I go any further I do confess to having a long history with MAMMA MIA!, the show and movie, not the song. although I’ve sung along many times to this 1975 classic ABBA favourite.

Although the show hasn’t been around as long as the song itself, there is no doubt it’s high on the list of favourite theatre and movie experiences.

MAMMA MIA! is on the road again (which almost sounds like a line from the song), and gets to Cardiff at the New Theatre from Tuesday 14th February – yes, that’s Valentine’s sorted this year.

The latest tour is celebrating 24 years since MAMMA MIA! premiered in London in April 1999. To date, the show has been been seen by over 65 million people in 50 productions in 16 different languages. In 2011 it became the first Western musical ever to be staged in Mandarin in the People’s Republic of China. It also became became the 8th longest running show in Broadway history where it played a record-breaking run for 14 years.

If you were to speak to any of the team behind its success (which I have on a few occasions), they will each give you a different reason for its success. For me though, it’s the fact it’s as near real life as you can get, with a story many of us can somehow relate to. And that is down to the genius of a Bristolian woman called CATHERINE JOHNSON who actually wrote the story of Mamma Mia, with help from some of the most incredible Benny and Björn songs.

As well as Catherine, the show was brought to the stage by the female-led team of producer JUDY CRAYMER and director PHYLLIDA LLOYD.

Judy is the Creator/Producer of MAMMA MIA! and has produced all 50 productions of the show in more than 440 cities around the world. Here she is at the opening of the UK tour at the Bristol Hippodrome.

In case you’ve been living remotely on a Greek Island for the last twenty years and know nothing about the show, here’s the plot.

it is actually set on a gorgeous Greek island and tells the story of Sophie, a bride-to-be who wants nothing more than for her father to walk her down the aisle. That’s going to be tricky though, because Sophie doesn’t know who her father is.

Sophie’s fiercely independent mum, Donna, had three relationships which ever-so-slightly overlapped. So any of three men could be her father. Without her mother’s knowledge, Sophie invites all three to her wedding. What could possibly go wrong?

Now this is where it all gets fun. The characters we all know so well, who hasn’t loved the Donna/Sophie Mother/Daughter relationship. Well, I can tell you, there really is a Donna and Sophie.

Many years ago show writer Catherine used to go to a Mother and toddler Yoga class in a church hall in Bristol, where they would play ABBA songs as it happens. It was there she spent time with those who are now her best friends, and you’ve guessed it, she named the MAMMA MIA! characters after her real life besties. I can also tell you that they know how to party just as much as those in the show.

The songs in MAMMA MIA! are part of all of our lives, and will probably be that way forever. The response to the live ABBA concert in London proves that. All of our favourites are in the show – Honey Honey, Money Money Money, Thank You For The Music, Mamma Mia, Chiquitita, Dancing Queen, Lay All Your Love On Me, Super Trouper, Gimme! Gimme! Gimme! (A Man After Midnight), The Name of the Game, Voulez-Vous, Under Attack, One of Us, SOS, Does Your Mother Know, Knowing Me, Knowing You, Our Last Summer, Slipping Through My Fingers, The Winner Takes It All, Take a Chance on Me, I Do I Do I Do I Do I Do and I Have A Dream.

If you haven’t experienced MAMMA MIA! live, I can assure you there is plenty of chances for you to get on your feet and sing and dance with the cast in the most incredible sing-a-long finale.

We all love ABBA, and it’s clear that 65 million of us really love the show, but how much do you really know about them noth?

TEN MAMMA MIA! & ABBA FACTS YOU MIGHT NOT KNOW…….

The MAMMA MIA! UK & International Tour is produced by Judy Craymer, Richard East & Björn Ulvaeus for Littlestar in association with Universal and NGM.

The new cast are making their way around the country, getting to the New Theatre in Cardiff on Tuesday 14th February where they’ll stay till Saturday 4th March. Tickets start at £20.00. Performances are at 7:30pm each evening with 2:30pm matinees on Thursday and Saturday. For more details, and to get yours, go HERE.

With a Groove in its Heart QueerWay is Touring South Wales

Heart-Warming and Hilarious – Peacock Debuts in Newport Next Month

The Tiger is Coming to Tea in Barry 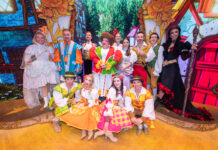 Beauty and the Beast Has Broken Box Office Records in Swansea